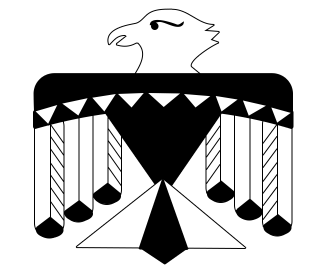 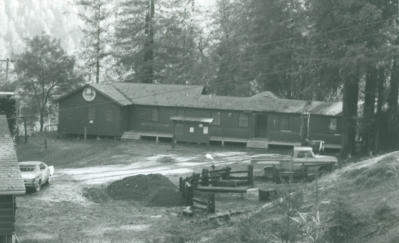 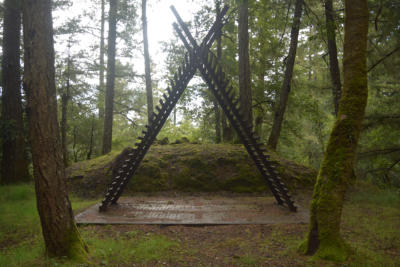 A Scout is Reverent – The 12th point of the Scout Law. All Scouts and leaders are welcome and encouraged to use the Camp Chapel by the lake. Troops requiring specific denominational services may invite their religious leader to Camp to aid them in this. The Chapel is located at the end of the ridge next to the Pioneers Campsite. The Chapel was built in 1960 and is dedicated to Harry Levison, a former Scoutmaster from the San Francisco Council and Royaneh camper 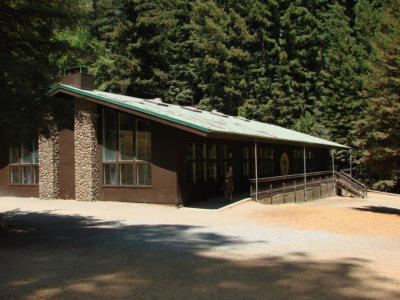 The current dining hall at Camp Royaneh is actually the second dining hall. The first dining hall was built in 1925 and was replaced in the mid 1980’s when a large redwood fell on the building.

The Dining Hall has always been large enough to accommodate the entire camp at one sitting. During the 1920’s, each tent or patrol was assigned a certain table in the Dining Hall. The Dining Hall was a long wooden building with wire screen windows all around. Each tent had to assign two boys for Dining Hall duty or K.P. Those assigned each day had to be at the Dining Hall one-half hour before each meal. They would get the dishes and silverware for their table and set it. The dishes were very heavy chinaware. The cups were mugs without handles. With a little practice a boy could carry all eight cups for his table in one hand while his partner carried eight plates and bowls.

At meal time all of the patrols would file in only after having their hands checked for cleanliness and then take their seats at their tables. They sat quietly at their tables until the Chief, his “aide”, and the Officer of the Day would take their seats on a small raised platform at the front of the hall. Someone would then say grace and the K.P.s would make a mad scramble for the kitchen serving counters. They would bring the platters of food to the tables. It was then served family style. There were strict rules about not taking more than your share when the food was passed around.

If someone asked you to “pass something” no one would dare help themselves to the food while it was on the way to the one who asked. If he did he was liable to have to stay and do the clean-up duties in place of the K.P.s.

From the 1930’s to the 1950’s, campers sat at long, oil-cloth covered tables. Dining Hall Stewards set the tables and served the meals. When a bowl of food was empty it was held aloft by a camper and a Steward would take it to be refilled. In the old Mess Hall before they had a porch, the steps were very steep and the inside was very dark. There were long tables for twenty-four diners.

Wherever there was a Rookie – a first-year camper – the old-timers would always pick up the side of the oilcloth table cover to form a trough and they’d pick out one Rookie. Then they’d pour bug juice in the trough and let it come down to him where it would run out of the trough and wet his pants. This was just a little harmless entertainment for the older fellows.

During the 1950’s the long tables were replaced with smaller ones that seated ten people – eight from the patrol, one troop leader, and one staff member. These tables are still around today. The patrol members took turns waiting tables. They were known as “Table Trotters” – “TT’s” for short.

In 1971 the original kitchen built in 1925 was replaced with the kitchen that is currently being used. During the summer of 1982 when the dining hall was being rebuilt, meals were transported by truck from the kitchen down to the Quonset hut near the barn for dining. On a hot July day it made for interesting condition during meal time. The modern structure of today, with its laminate arches and fire place made from stones that used to line the San Francisco cable car tracks, is a much pleasant place to enjoy your meal. 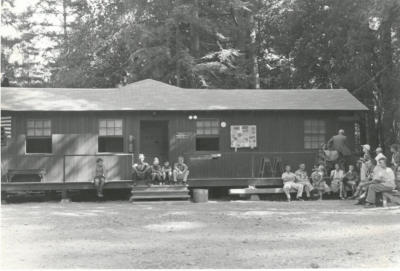 The Trading Post is located in the building to the west of the Admin building and serves as a general store providing a variety of refreshments, as well as general Camping equipment, t-shirts, and Camp Royaneh souvenirs. Scoutmasters may want to provide leadership to Scouts to assure that purchases are reasonable. The Trading Post is available after meals and during program time. The Trading Post accepts cash, checks, as well as Visa & Mastercard . The Trading Post also has Camping equipment and materials you’ll need to complete those Merit Badges you’re working on. If you forgot your coffee mug, you can pick up a new mug from our friendly staff. Merit Badge books can be purchased here too! The Lost & Found is located in the Trading Post. Please make sure that all of your Scouts’ gear is marked with their name and Unit number in case it is turned in.

Order of the Arrow